Step Up to the Plate in a Crisis 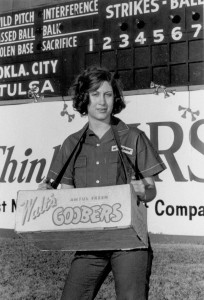 Baseball and big oil have been very good to me, to paraphrase the late baseball great Roberto Clemente. Baseball and oil both run in my blood.

My first job was hawking peanuts, popcorn and crackerjacks at Tulsa Oiler Park, home of the Triple A affiliate of the St. Louis Cardinals. As the first female vendor dubbed “Goober Girl,” I broke the gender barrier back when Tulsa, Oklahoma was still the “oil capital of the world” and teenage girls babysat to make money.

My first professional communications job was a paid internship in the Public and Government Affairs Department of Amoco, now part of BP, in its Chicago headquarters. Over the course of two academic years in college and one summer, I served as the assistant editor and writer for four publications.

So recent events—the BP Gulf of Mexico oil spill and the imperfect perfect baseball game—have captivated me, especially their juxtaposition. They’ve also illustrated that men who play games can be better role models and leaders than captains of industry.

What more can be said about BP CEO Tony Hayward with his tin ear and loose lips who said he would like his life back? (By the way, where are the members of the BP Board of Directors? What are they thinking and doing?)

Now contrast the BP executive’s words and actions with Jim Joyce, the established baseball umpire who blew the most important call of his career. He immediately apologized to Detroit Tigers pitcher Armando Galarraga for calling the hitter safe at first base, which robbed the young pitcher of a perfect game. Joyce also apologized to the Tiger’s manager and the fans.

Granted, the bad baseball call took place in the “toy store of life,” as one of my professors called sports. The adverse impact of the call is an almost invisible asterisk compared with the economic, environmental, and emotional damage the BP oil spill has inflicted.

1. Be fast. Once Joyce watched the videotape and saw that he missed the call, he took responsibility immediately. He not only apologized to the pitcher in the Tigers clubhouse, but he also expressed his regrets to the media. Joyce didn’t wait for others to tell him to act like an adult, be responsible, and move quickly.

2. Care about others. By taking immediate responsibility, apologizing, and showing concern for Galarraga and his teammates, Joyce demonstrated that he was the player in this drama, not the focal point. Galarraga was the victim of Joyce’s bad call. Rather than wallow in self-pity, Joyce stepped forward to show that it’s dignified to admit a mistake, show vulnerability and express sincere interest in others.

3. Get back in the game. The very next day Joyce worked as home plate umpire. He decided to work rather than take the day off as he was offered. By being in close proximity to the players and coaches, he demonstrated respect, integrity, and responsibility.

These were simple, yet extremely powerful, significant and memorable actions. They also provide a teachable moment for the rest of us.

In both the substance and manner of his communication, Joyce was direct, respectful, and responsible. This is LEAN COMMUNICATIONS™ in principle and in action.

What do you think?