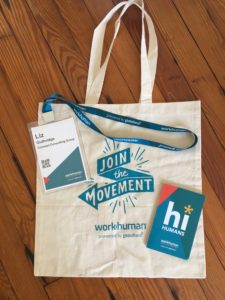 First, some background. WorkHuman — the concept that you bring your whole self to work — is more of a movement than a conventional conference.

And this movement is growing! According to Globoforce, (now named WorkHuman), the recognition and rewards company that pioneered this conference back in 2015, attendance has grown by 500% over the past four conferences.

Last year was my first time experiencing WorkHuman with its impressive roster of keynoters and more than 1,600 enthusiastic participants. (See How to feel more like a human at work about WorkHuman 2017.)

This year more than 2,000 of us gathered in Austin to hear from many A-list leadership experts and others. (We also stood in longer lines, and got closed out of breakout groups, which doesn’t feel like an ideal human experience but ….)

These seven moments made the biggest impression on me:

These moments show the importance of humans connecting, respecting one another and building something bigger together than each of us could individually.

Here’s to keeping the momentum of WorkHuman going and growing!

Will you join the movement?