Why and how to ignore this bad advice: “Know your audience” 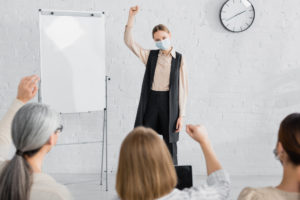 “Know your audience” is great advice for actors, musicians and other performance artists.

For those of you working in organizations, “know your audience” is bad advice because it sends the wrong message. It’s too easy to interpret the phrase as follows: “You’re a performer on stage entertaining people sitting passively in the audience.”

As another saying goes, you want to be much more granular in your approach. You want to know the specific individuals you’re talking with before you start a conversation or give a presentation. Keep in mind, there’s a good chance you know many of them personally, which should make it easier for you to decide the best way to tailor your message for them.

This personal connection is important because you have a different goal than those on the formal stage. Your primary goal is not to entertain or generally to introduce brand-new concepts.

Instead, your goal is to get individuals, often team members and employees and other stakeholders, to take some type of action. This could range from asking questions to conveying information to customers to changing their behavior or anything else that involves doing something.

Because you’re expecting action, you want team members and employees paying attention, leaning in, and involved. In these situations, the individuals you’re talking with are participants or even the customers of your messages whom you want to empower. They are NOT your audience.

Furthermore, you’re “talking with” not “to” or “at.” Conversations are two-way exchanges. And you want to have conversations with individuals, not address the masses.

If you think I’m being a stickler about terminology, please hang on. Because you want action, you need to give people an opportunity to question, comment, observe, and even criticize, complain, and vent. That’s because humans have a need to understand what you’re asking them to do. And often they need to use their voice (and hear themselves speak ) to clarify what they’re hearing from you.

By contrast, when you and others take the stage to address an audience, it’s a different event. An audience is not invested in doing anything, even if they’ve paid money for their experience. That’s why “know your audience” is bad advice that you need to ignore.

An audience is a group of spectators sitting on the sidelines or in comfy seats in the dark, this being the common definition of audience. However, I recently learned from colleagues that in the educational field of communication studies, the term “audience” refers more broadly to “the receiver whom the message sender may know something about.”

In the work world though, that’s an esoteric definition. And if you adopt it for how you identify your team members and employees, I fear you’ll be prompted to take the easy way out and not challenge yourself to fully engage individuals in your conversations and presentations in a compelling way that appeals to them. And you need engagement to get people to respond to your calls to action.

After all, aren’t passive listeners and viewers different from participants, team members, employees, customers, stakeholders and other players on the field  taking action?

By the way, I blogged about this topic almost 10 years ago in Outlaw audiences and attendees. But obviously with the term “know your audience” still widely used, I haven’t made much, if any, traction. And it remains my pet peeve.

Here’s hoping in 2021 more influencers than those who use lean management and manufacturing practices will follow my request for action: Please drop the phrase “Know your audience” and instead adopt “Identify who you’re talking with.” And for extra credit, further define: “Who’s getting your call to action?”