Why and how to cure tunnel vision with “anthro-vision” 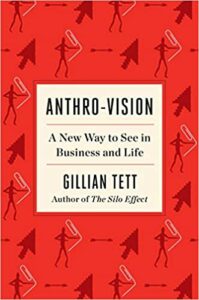 Did you have WEIRD experiences as a college student? Not WEIRD as in strange, but WEIRD as participating in psychology, economics and other social science experiments?

If so, you and I are definitely part of the WEIRD – Western, Educated, Industrialized, Rich and Democratic – society.

Our WEIRD background makes us unusual from a psychological perspective. Because of the WEIRD culture in which we live, we’re more analytical, individualistic, and impersonal compared with other humans around the world. That’s according to Dr. Joseph Henrich, a professor and chair of Harvard’s Department of Human Evolutionary Biology.

Dr. Henrich coined the WEIRD term about a decade ago and then wrote the 2020 book, The WEIRDest People in the World: How the West Became Psychologically Peculiar and Particularly Prosperous.

There’s nothing wrong with being WEIRD. We just think, reason, and infer differently from those in other geographies. And as a result, social science researchers who only use WEIRD individuals as study subjects shouldn’t readily generalize their findings to apply to all humans.

This information nugget is more interesting than useful, considering everything else my clients and I are dealing with right now.  And compared to all the environmental, economic, societal and political turmoil in the world right now, this weirdness doesn’t register very high on the Richter scale of oddities.

However, when I read about WEIRD in a new book this week, I better understood two developments in the field of social sciences.

One, the replication crisis in the social sciences research. For a number of years now, researchers have been concerned about the difficulty of replicating results of many social science studies – sometimes even impossible. This has led to questioning the scientific validity of the research, especially in light of the large sample size of WEIRD subjects. For more about this, check out this article, Solving the Replication Crisis By Replicating Less.

Two, the concern, especially among many anthropologists and others, that Big Data alone cannot explain the behavior of Western consumers.  For that matter, Western consumers themselves often cannot explain their actions either. Even though Western consumers think they make rational choices and decisions, their actions are more “complex and contradictory than they realize.” That’s a sentiment that Gillian Tett, a Cambridge-trained social anthropologist as well as a best-selling author and award-winning journalist shares with many others.

In her newest book, Anthro-Vision: A New Way to See in Business and Life, Tett advocates using an anthropological lens in business to examine consumers, organizations and markets. She says that by combining qualitative social data with quantitative data we’ll be better equipped to make sense of human culture. As she puts it, “AI” should stand for “anthropology intelligence” as well as “artificial intelligence.”

Tett also suggests intentionally making the “familiar strange” and the “strange familiar” to help us make explicit what had been implicit. That will help us  better see and understand our surroundings. (This is similar to the “clarity of distance” that we coaches have.)

As an anthropologist, Tett also believes in the value of everyone questioning assumptions to freshen our points of view. We also need to broaden our perspectives. Too often, she writes, people in organizations are “plagued with tunnel vision.”

If we’re able to broaden our focus and use more lateral vision, we’ll be better equipped to see the subtle shades of gray and other nuances that exist in our complicated world. This can guard us against seeing things in black and white, and jumping to conclusions too quickly. The wider focus also will help us appreciate the great diversity among humans.

Having enjoyed Tett’s insightful 2015 book, The Silo Effect: The Peril of Expertise and the Promise of Breaking Down Barriers, I read Anthro-Vision soon after its publication date and highly recommend it. (The earlier book is still one of my go-to resources. You can check out my blog 3 ways to blend, not bust, silos to get better results.)

As in The Silo Effect, Tett includes many great examples in Anthro-Vision. Many include anthropologists working in organizations, primarily large global companies.

My favorite was the case study about General Motors. Several years ago engineers from three divisions of GM (German-based Opel, Tennessee-based Saturn, and the Detroit-area based small car group) came together to work on a special project. Early on, bickering broke out during meetings. Most of the skirmishes were among the Americans, due to all the tribalism within GM here at home. I too had experienced the in-fighting when working with GM on a joint venture a few years earlier.

The reading of Anthro-Vision along with observing other trends gives me hope. We humans teamed with Big Data can bolster our intelligence. And in doing so, we’ll improve our understanding of human behavior, which can lead to better working conditions and improved organizational results. Are you ready for more AI?