Why and how to be an accomplished daydreamer 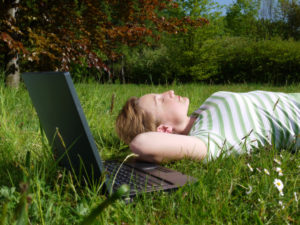 “Strategic planning is hard. I’d rather do tasks than think about the future and plan for it. Just tell me what needs to be done and I’m on it.” — a participant at my most recent strategic planning workshop

Yet our brain, without prompting, can spend a lot of time pondering the future, I explained to her and the other workshop participants.

And if you prime yourself to think about the future, you may not only enjoy strategic planning, but you also may be more effective at it.

Here’s how this works from the perspective of the brain: The brain’s default network is its workhorse. Operating 24/7, this large network of brain regions toils silently in the background, noting patterns, holding memories, and maintaining habits.

One of the huge advantages of the default network is that it can work on billions of things at any one time without getting exhausted, unlike the prefrontal cortex – known as the executive function.

By contrast, the prefrontal cortex does serial processing, working only on one thing at a time, such as abstract thinking, including planning and goal setting; decision making, reasoning; and learning new things. It tires easily.

(That’s why crafting responses to sensitive email messages while being on a conference call can take so much out of you. Plus, you may realize that you didn’t do either task as well as you should have.)

Your default network activates when you think about yourself and others, contemplate the future, or remember the past.

And when your mind wanders or when you daydream, you’re more likely to be thinking about the present or the future, not ruminating over the past.

Back in 2015, social psychologist Dr. Roy Baumeister and several colleagues carried out a carefully crafted study to figure out what was going through people’s minds as they carried out their daily activities.

Almost 500 people in Chicago participated, carrying a special cell phone that interrupted them at six random times during the day for three days. When the cell phone pinged, the study participants noted what they had been thinking and answered a series of questions.

Not all their thoughts had a time aspect. But for those that did, thinking about the present was the most common, followed by the future, and then the past. In fact, people thought about the future three times as much as the past. (This study is described in two books, Farsighted: How We Make the Decisions That Matter the Most by Steven Johnson, a terrific read, and Homo Prospectus by Martin Seligman, Peter Railton, Roy Baumeister, and Chandra Sripada.)

Other researchers have noticed the same thing – when our mind wanders, it’s often about the future.

So, if you’re already unconsciously thinking about the future, how about improving your daydreaming abilities to unearth more futuristic ideas? Maybe they could even be provocative, exciting, and inspiring. After all, daydreaming also helps your creative juices flow.

Some tips to help you become a more accomplished daydreamer include:

By taking time to daydream, you’re taking advantage of your default network’s natural inclination – pondering the future. How about that?