What Black fatigue is and why you need to be empathetic 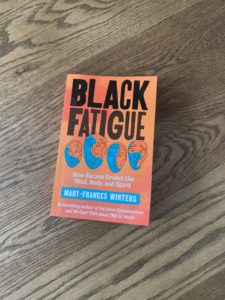 If you were to reimagine a new United States of America – an America in which all individuals are truly created equal with absolute rights, including life, liberty and the pursuit of happiness – what changes would you add to your wish list?

The book is a valuable wake-up call about the breadth and depth of the disparities between whites and Blacks today plus the pain Blacks are feeling. The systemic racism that’s been built into the United States over hundreds of years adversely affects all aspects of Black people’s lives. This includes their health, economics, education, workplace opportunities, justice, and social status.

The book is a worthwhile read for Blacks and whites. Besides describing the issues, Winters includes actions that each group can take independently and together to counter Black fatigue at work and in society.

Furthermore, for Blacks, the book confirms Black fatigue is a real condition. Dealing with racism and violence against Black people is exhausting.

For whites, the book introduces a world many of us haven’t even seen. Winters shares vivid stories of experiences of Black people, some of whom haven’t felt comfortable speaking up before, especially about work issues.

Whites will also learn about the historical underpinnings of systemic racism. And you’ll understand why racist-free work environments and racial justice are not just a nice-to-have but instead necessary for an equitable society.

And when whites become more knowledgeable about the issues, our empathy should increase. That in turn should make us more open to support and advocate for systemic change at work and in society at large.

Interestingly, Winters said she conceived and wrote Black Fatigue before the current focus on anti-Black racism sparked by the killings of George Floyd, Ahmaud Arbery, Breonna Taylor, and others.

After these tragic events unfolded, Winters quickly updated her manuscript. She acknowledged the rapidly rising stress levels related to the deaths not only at the hands of police but also from Covid-19, which has disproportionately killed Black Americans. The book, published in September 2020, reads like a recent magazine article with end notes.

This is Winter’s sixth book and the first ever book to define and explore Black fatigue. This fatigue encompasses the “living while Black” term that many Blacks use to describe the “myriad unjust and inequitable experiences that are relentless and too often lead to violence against Black people.” Winters also chronicles the fears, frustrations, anguish and rage that is a regular part of Black people’s daily lives.

Importantly, Winters also addresses the “sublime ignorance” that most white Americans, including corporate leaders and employees, have about Black fatigue.

Winters knows this ignorance exists because of the polls she and her team take during their virtual consulting sessions with white employees. Only about 10 percent of the mostly white participants say they are “very knowledgeable” about this country’s history of racism.  (That statistic didn’t surprise me considering how my textbooks glossed over the topics of slavery, Reconstruction, Jim Crow laws, lynchings, etc. Thanks to recent programs through the Racial Equity Institute and the ACLU’s Racial Justice Program, I’ve become more educated.)

If you have a knowledge gap in your American history, reading Black Fatigue can help you fill in some holes. And you’ll also learn how some of the progress gained through Supreme Court rulings and legislation in the 1950’s and 1960’s has stalled. In some situations, we’ve even gone backwards.

As more of us increase our awareness and understanding of racism, we’ll feel less white fragility and more openness to discussing these issues and then acting on them.

For example, in working with Mercedes Martin & Company, we convene learning labs for leaders to explore these issues in a safe place. They increase their understanding of inclusion, diversity, equity, accessibility and sustainability as they also improve their self-awareness. This work prepares them to create an inclusive culture and work environment to ensure employees feel seen, heard, and connected.

Courageous conversations like these and others are necessary if we’re to dismantle racism and replace it with equity and justice for all in this country.