Want to improve your well-being and productivity? Work fewer hours! 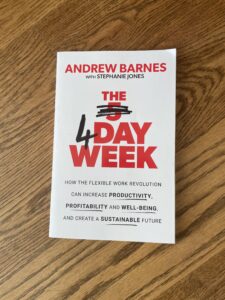 Would you like to work fewer hours with the same pay and benefits? Yes, you read that right, reduce your standard work week by 8 hours–from 40 to 32 hours–while maintaining the same level of pay and benefits.

That was the grand experiment some Perpetual Guardian employees undertook back in 2017 when their founder and New Zealand entrepreneur Andrew Barnes decided to test his hypothesis.

As Barnes explained at the 2022 NeuroLeadership Summit, his experiment was sparked by reading a magazine article about how employees were productive for only two-and-a-half hours a day.

He started to wonder if all of the office “noise” distracted employees and reduced their productivity. For example, employees might find it hard to focus with all of the intrusive addictive technology, excessive meetings, and other disruptions.

To test his hypothesis, Barnes decided to ask some employees to try a shorter work week. Also, he requested that they switch their orientation toward their job. Rather than watch the clock and count hours at work, they were to concentrate on the amount and quality of the output they needed to accomplish.

Barnes’s experiment was successful beyond his expectations, which encouraged him to switch his entire workforce to a 4-day workweek. The results have been such a win/win for employees and the company alike that Barnes has been catapulted into becoming one of the leaders of the global 4-day work week movement. He is the main author of the book The 4 Day Week: How the Flexible Work Revolution Can Increase Productivity, Profitability and Well-being, and Create a Sustainable Future.

Employees have found a lot to like with the shorter workweek with the same pay and benefits. Employees’ reported stress levels decreased 15%, their engagement increased 40%, and their productivity rose 25%.

The 4-day work week also serves as a super example for a regenerative approach to managing people and systems. Regenerative practices – the idea that you make things better rather than leaving them the same, or worse, depleting them – was a popular topic at this year’s Summit. Two of my three big a-ha’s were on this topic.

A-ha #1: We need to take a regenerative, not just sustainable, approach to managing people and systems. And a-ah #2: Adopting a 4-day work week is a win/win for employees and organizations as well as regenerative.

For example, when people have more autonomy over how they spend their time, feel psychologically safe, and get opportunities to relax, regroup, and reenergize, they flourish—which helps the organization flourish. For more about this regenerative approach discussed at the Summit, check out my blog post How to be good in today’s world? Be regenerative, especially with people.

In fact, employees getting autonomy over their work schedules has been a huge contributor to the 4-day work week’s success and great results, Barnes explained. By being able to manage their work schedules, employees have been able to figure out to design the best work schedule for their personal needs. They no longer have to force themselves – and their brain – into a suboptimal schedule.

The flexibility employees enjoy also provides them with benefits that money can’t buy. For example, Barnes said that one of his employees still comes to the office Monday through Friday. But now he but takes off two afternoons a week to spend with his young granddaughter, which provides him immense joy.

Managers were leerier of the 4-day workweek than their employees were, Barnes said. To bring the leaders along and get them more comfortable with the change, Barnes ran several trials to demonstrate that they could break the pattern and get everyone to focus on the output they produced, not the time they spent working.

Leaders came around, especially after they realized that working longer hours does not translate into working harder and better. Leaders also learned that they had to keep direct reports informed and engaged at a different level than previously. Since not everyone was in the office every weekday, including the leaders, they had to empower employees to be more involved and make more decisions.

After several years of working with a 4-day workweek, Barnes now sees other benefits in addition to reduced stress and anxiety and increased well-being, productivity, and profitability. His firm has helped limit carbon emissions thanks to less mass commuting and  is beginning to address the gender pay gap.

Now that’s a win/win/win for employees, the organization and society!