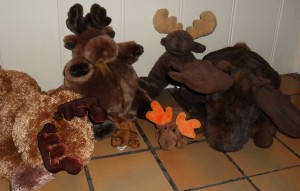 Silent Sugarcoated Moose on the loose

Who knew sugarcoating could be so controversial? My guest blog post “Stamp Out Sugarcoating” for Mark Graban elicited several comments from readers who approved of sugarcoating messages.

“Call me a Mary Poppins fan,” one reader wrote, “A spoon full of sugar helps the medicine go down. Without a little sugar, these letters risk coming off cold and harsh. However, don’t pour the whole sugar bag into it which tastes just as bad. Balance and moderation is best.”

When you sugarcoat communication though, you’re superficially making something attractive or palatable. That’s inauthentic, which can cause more problems than the proverbial putting lipstick on a pig.

As the creator of the Silent, Sugarcoated Moose® as well as being The LEAN COMMUNICATOR™, I respectfully disagree with sugarcoating communication and am saying so. The Silent, Sugarcoated Moose®  is a mutated species of the “moose on the table” or the “elephant in the room.” Everyone sees and knows about the moose but no one says anything. And everyone continues to ignore it when others try to put a positive spin on negative news. Or, they attempt to silence the moose and everything around it, which feeds the rumor mill and starts to hurt productivity, relationships and trust.

Straight talk that’s not sweet or sour is the way to go. It’s direct, clear and responsible. And as a result, it shows respect. All solid LEAN COMMUNICATIONS™ principles.

1. Share the facts. Don’t hide them. For instance, a couple of clients recently wanted to hide the truth or at least not showcase it. One of them has higher IT project costs than the industry average. The other has higher invoice processing costs than the industry average.  Both companies are taking actions to reduce their costs over time. And both were hesitant about saying that their current costs are above what their competitors are paying. Yet, people will understand the need to get costs in line and more than likely will support the required actions to do so.

2. Explain diplomatically. Don’t use flowery language that’s a backhanded criticism when you give your rationale. Instead, clarify the circumstances you’re now in. For example, in these client situations, the companies did some benchmarking and discovered their costs were out of line with what other companies are spending, which makes them less competitive. Now that they know this, they’re going to take some action. That sounds sensible.

And certainly don’t do what a board chairman wanted to do: Declare a board member “Out of order!” for trying to introduce a new business item at the wrong time. The chair could have been more respectful and discreet by asking the board member to wait until an appropriate time to talk.

3. Be timely. Don’t avoid sharing the information or bringing up a difficult issue.  What you ignore becomes more. As the situation festers, you’ll get more irritated and you’ll run the risk of making things even worse. So set aside time sooner than later to deal with the issue. Remember, the longer the Silent, Sugarcoated Moose® stays around, the stinkier he gets, which can hurt your reputation and credibility.

So what do you think? Whether you’re in favor of sugarcoating or not, just dish it to me straight.