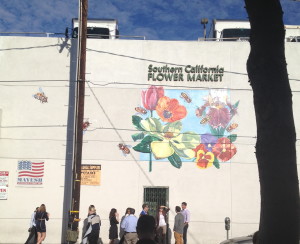 Who says offsite meetings have to be in conference rooms? Or even indoors.

Why not go outdoors? And do some time travel too? And while you’re at it, get a jumpstart on some key actions.

Check out this “meeting on the move.”

Last month, 25 members of a global corporate communications team rode around Los Angeles in a trolley for a day-long adventure that was fun, social and educational—quintessential “edutainment.”

The idea for the day started about eight weeks earlier when the team leader and I started to plan her upcoming offsite.

She had some particular needs. Several of her team members were new to the company so she wanted to get them acquainted with other team members as well as the company, including its rich history, its values and its current operations.

Also, as this business-to-business company starts to embrace social media as a way to connect better with its customers and potential candidates, she wanted her team members to lead the way in “getting social.” After all, if the communication staff members were reticent about tweeting or posting on Facebook, how would that look to everybody else?

And last but not least, as the company prepares to celebrate its 80th birthday next year, it needs to tell its story through social media and video.  It’s unlikely many people will be interested in reading a 196-page book, which commemorated the company’s first 50 years.

Based on these needs, we decided the offsite should achieve these five goals:

We quickly landed on the idea of doing a field trip instead of convening a conventional meeting.

Further, we decided to add some special components to support telling the company’s story in a “getting social” age. Namely, we’d encourage everyone to set up a Twitter account in advance of the day so they could practice story telling in 140 characters.

We also invited a video team who could record the day as well as interview the communication team members. This served as a double purpose: helping team members become more comfortable being in front of the camera as well as getting footage for recruiting videos, general company videos and other uses.

The first stop focused on the past, the site of the company’s birthplace, which today is in the L.A. flower district.

For the next two stops, we returned to the present, visiting two customers and touring their operations. (We conveniently called on the winery second so we could sample their wine with our lunch in one of their tasting rooms.)

For the fourth and last stop, we traveled to the University of Southern California campus to meet with professors at the Annenberg School for Communication & Journalism. We wanted to hear about their research and work with students to help us better prepare for the future.

Throughout the day, team members were smiling, chatting energetically and tweeting with gusto—not your typical meeting behavior.

They also were raving to us—their leader and meeting facilitator—about their experiences.

Their in-the-moment enthusiasm has lasted too. A couple of weeks later when they completed their online feedback survey, they gave similar ratings, this time anonymously.

When asked “What was your biggest take-away from the day?” comments about this unconventional offsite included:

Team members also shared a number of ways in which the experience has started to influence their work.

For me, this experience has validated the value of incorporating these three elements into as many meetings as possible:

1. Going to the gemba—that is, where the work gets done.  As one participant commented, “I loved getting an intimate look at how our products and solutions are being used by our end-users. Watching our labels being placed on wine bottles and our embellishments sewn onto jeans was so memorable.”

3. Being able to try something new in a relatively safe setting. In this case, some were trying Twitter for the first time and discovering its effectiveness as a tool for sharing insights and listening to others.

By being brain-friendly, these elements help increase engagement and retention.

Also, all three elements keep us grounded while we try to anticipate what’s next so we can be more effective in our VUCA (volatile, uncertain, complex and ambiguous) world.

They now serve us better than the scripts many of us created and followed in the past. As I explained to the team, we need to lose our reliance on scripts because the world changes too quickly for scripts to stay current. Plus, people expect to interact with real people, not actors reading lines.

Instead of scripts, we need to embrace improv. Improv helps us be present and open to exploring new offers and opportunities.

While we extensively planned this meeting, we didn’t script it, and it wasn’t perfect. However, I believe we showed the way to make a meeting meaty, mobile and memorable.

What are you doing to improve the impact of your meetings?