How your boss leaving imposes you into a new place: liminal space 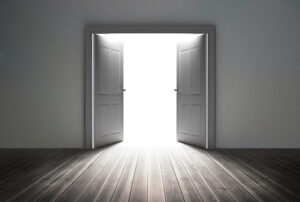 Wherever you work these days – home, the office, or hybrid – it’s likely you’ve also moved into another space, called liminal space.

Liminal space is literally the doorway between one space and another. Liminal is from the Latin “limen,” which translates into “threshold.”

In an organizational context, you enter liminal space when you make a transition, whether it’s voluntary, optional, or forced. These transitions can include working in a new space as mentioned above, being promoted into a new role at your current company, leaving your employer, saying good-bye to colleagues who are leaving, or any other of the many work upheavals going on.

While the Great Resignation, quiet quitting, and now quiet firing are getting attention in the media, there’s another trend afoot. Many C-suite leaders are feeling the burn and the churn and opting for liminal space.

The situations can be as varied as the executive. Switching to a new opportunity at a different organization. Retiring. Taking a break. And tragically, one leader, the Bed, Bath and Beyond CFO, took his own life in early September.

The impact of these senior leaders’ actions? The staff members left behind are being involuntarily thrust into liminal space whether they want to be there or not.

So what happens when liminal space is imposed upon you at work, rather than when you’ve chosen it? Say “hello” to a number of disruptions that you hadn’t prepared for, especially if you’ve recently said “good-bye” to a number of co-workers. And you could also be dealing with any number of other restraints endemic to the work environment today.

However, you also can take a breath and view liminality as an inflection point that can provide you with opportunities to explore, adapt, and grow. That’s the point of view of the global consulting firm, the telos institute, with which I’m affiliated. The firm advocates harnessing the power of liminal space. Liminality to telos is “a period of discontinuity that creates an openness to change.”

So rather than putting your head down and trying to plow through an inflection point imposed on you, first pause, and then contemplate the situation you’ve just inherited. What do you need to navigate so you can stay afloat and then move forward? And then how can you make the most of a difficult situation, maybe even traveling to a better place rather than just getting yourself to solid ground?

Consider the challenges one of my clients is now facing. Between recent coaching calls, my client’s remaining boss announced his departure. A few months earlier, the vice president she reported to had resigned to take a role at another firm. Now the business unit leader, to whom she was temporarily reporting until they hired someone to fill the VP’s slot, told her he had agreed to move within the holding company and head up a different operating company.

My client’s immediate need after muttering “Not again!” was to reimagine the 3 R’s, as I’ve dubbed them. Forget about “reduce, recycle, and reuse” and “reading, writing, and arithmetic.” She needs to focus on “relationships, resources, and reliable route.”

Specifically, how quickly can she identify the following?

Once she’s got these 3R’s under control as well as any other immediate issues, she and her team can catch their breath and start to be more intentional about how they use their liminal space.

Being intentional helps in two ways. First, they stay focused on what they need to do. Second, they can challenge themselves to use this inflection point, which is the advantage of liminal space.

For example, can they use this time to reexamine their actions and explore new opportunities? As one of my other clients likes to say, “Our goal should be to emerge from our metamorphosis as a beautiful butterfly rather than just a slightly sexier caterpillar.”

Granted, when operating under constraints, it may be hard to see new opportunities. But if they keep their heads down and don’t look up, they definitely won’t see anything new.

Instead, by using this time to challenge their beliefs, perspectives, and habits in a positive and productive manner, they may be able to design a new and better preferred future. And they’ll be able to grow and develop – not just become a better caterpillar but a full-fledged butterfly.

What about you? If you’re facing discontinuity, especially with leaders moving out above you, how are you willing to use this liminal space to your advantage? Contact me if you want to discuss.