How weak are your social muscles these days? 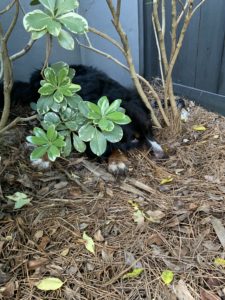 Even the dogs are acting weird these days.

When we’re outside walking, Marcel the Therapy Dog who used to adore attention from humans, will now often wrap himself around my legs when he thinks a stranger is getting too close to him.

When Marcel’s in my office, he no longer looks up when I get on a Zoom call. Nor does he get up and amble over to see who’s on the screen. He’s become totally blasé about Zoom. After being on furlough from his three pet therapy jobs for almost seven months now, he’s become used to napping throughout the day.

By contrast, one of his co-workers, Jax, has started to lunge toward people, craving more human contact, according to his human parent.

So when I read Kate Murphy’s New York Times article, “We’re All Socially Awkward Now,” I realized the extent of two powerful forces at work as the pandemic wears on and our in-person interactions continue to be limited.

First, many of us are becoming socially clumsy. The signs of this “social malaise” are everywhere if we stop to observe. Since many of us are not using our social skills as much these days, our social muscles are atrophying. We can be sluggish, ill at ease and less agile in social situations.

And second, it’s hard – and sometimes impossible — to see signs in ourselves even when we observe them in others. We have blind spots – even when we try to “look in the mirror” and study ourselves.

For example, take my experience reading the New York Times article on LinkedIn, which one of my contacts posted. The headline and photo caught my eye. When I clicked on the article, I was delighted to see the article’s byline. Kate Murphy is one of my favorite feature writers. She’s also the author of the insightful 2019 book, You’re Not Listening: What You’re Missing and Why It Matters.

The LinkedIn article generated many comments, including a number of concerns about Murphy’s article. The original poster was worried that Murphy was making too many generalities about peoples’ reactions to the pandemic – even though Murphy stressed in the article that “none of us are the same.”

Other commenters wrote that Murphy must be an extrovert because introverts weren’t showing any of the signs of isolation that she was writing about because the remote lifestyle fitted introverts. One self-proclaimed introvert wrote that she was “thoroughly enjoying the social limitations we are all now having to ‘endure’.”

From my perspective, Murphy wrote her article to provide a public service benefit. As she explained, social isolation over periods of time can lead to negative cognitive, emotional and physiological side effects. We’re wired to need and crave human companionship. Historically, being with others is a way to protect our safety and well-being. This is the idea of safety in numbers.

The take-away message from her article was to be aware of the downsides of isolation and take steps to minimize the adverse effects.

But I admit I didn’t take the time to try to reflect how socially awkward I may be becoming during the pandemic, even though I saw the signs in Marcel as well as my husband.

My ah-ha came weeks later when I was working with a coaching client, helping her reconcile how her perceptions of herself were totally different from her direct reports’ opinions.

I explained that we usually assume that others see us as we see ourselves – as we genuinely are and as we intend to be.

However, the science of perception doesn’t work like that. We’re not objective about ourselves. And we don’t fully recognize how subtle biases, experiences and interactions can distort the ways that others see us.  And as a result, there’s often a mismatch between how we perceive ourselves and how others see us.

That’s when the lightbulb went off for me about my behavior in the pandemic. Who knows how my social skills are deteriorating …? And when will I know?

Yet, as one of my colleagues noted, we’re not only isolated, but also suffering a series of potential life-transforming shocks. Once the ground stops shifting beneath us, we’ll be able to get firmer footing.

Meanwhile, she thoughtfully suggested that you do your best to find creative and safe ways to flex your social muscles. As always, try to forgive yourself and others for being imperfect.

And, perhaps most importantly, keep your expectations realistic. This is a very rough time. If all you can do right now is hold on, or even just try to hold on, you are doing a great job!