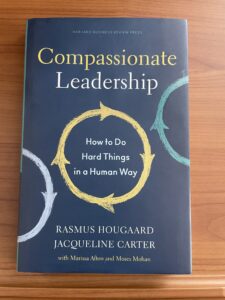 Being a good human and being a responsible leader are not mutually exclusive.

Compassionate leaders do both. In fact, doing hard things and making hard decisions is often the most compassionate thing to do, according to the authors and consultants Rasmus Hougaard and Jacqueline Carter. In their new book, Compassionate Leadership: How to Do Hard Things in a Human Way, the authors explain how leaders can practice “wise compassion.”

Wisdom, as they define it, is “knowing the right thing to do and having the courage to do it.” This means seeing reality clearly and acting appropriately, including being able to step up and deal with hard things rather than avoiding them or delaying taking action, especially when people are involved. Wisdom in leadership involves being brave enough to initiate candid and transparent conversations with others even when everyone is uncomfortable.

Compassion, as they define it, is “having the intention to be of benefit to others.” This can mean helping people acknowledge their behavior and helping them change it. Compassion is not about telling people what they want to hear and giving them what they want.

My experiences with compassionate leaders corroborate the authors’ research. Their quantitative studies show that those who lead with wise compassion rise through the ranks more quickly. Also, those with high self-reported compassion reap other benefits. They have 66% lower stress than their less compassionate counterparts, a 200% lower intention to quit, and 14% higher efficacy.

To learn how to practice wise compassion, the authors write their suggestions in a clear and direct style. By doing so, they’re practicing their own advice because they maintain that clear and direct communication is faster and kinder, especially when it’s “caring candor.”

“Caring candor” means delivering a message in a straightforward yet clear and kind and culturally sensitive manner with appropriate examples. In other words, don’t beat around the bush. When you’re direct yet sensitive, the other person can receive your message quickly without having to cut through the clutter, which helps them understand your point. You then can start the conversation to get to the crux of the issue and discuss what’s next.

By contrast, when you beat around the bush, individuals have to expend more cognitive energy to understand what you’re saying. By the time they figure out your message, they can be worn down, leaving minimal energy to have a conversation. And in some cultures, this indirect communication can be perceived as disrespectful.

Besides advocating for communicating clearly and directly, the authors advise to “connect with empathy and lead with compassion.”  Their distinction between empathy and compassion was one of the most enlightening and useful features of the book.

As they describe it, compassion has two separate yet related qualities: having empathy by trying to understand what another person is feeling and experiencing and the willingness to act in response. To say it another way, empathy is an emotion you feel and compassion is an intention to act.

This distinction is important from a leadership perspective for these reasons. When you’re compassionate, you’re confident you can do something. You’re not just caught up in the feelings of the moment. Also, when you are oriented toward compassion, you’re more likely to focus on doing something for the greater good rather than contributing toward the well-being of one individual. You use your compassion to unite people and support everyone.

When many of us are striving to practice more human-centered and compassionate leadership, this book serves as a great tool. It’s not perfect though. In the spirit of “caring candor,” I’ll share my two concerns.

Nonetheless, being always good is hard. And the authors have given us a great gift: a well-researched book on compassionate leadership that explains how to become better at doing hard things in a human way.