How to incubate lifelong curiosity and courage 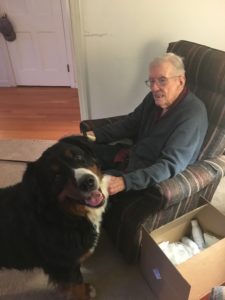 “Have c-c-c-courage!” my dad would tell me throughout my childhood as he channeled the Cowardly Lion from the movie Wizard of Oz.

Obeying him was fine with me, as long as he didn’t expect me to push any bodily boundaries.

No way did I want to take challenges or risks that could result in any physical pain.

Using my voice was another matter. Over the years, friends and colleagues have called me brave for speaking up, questioning the status quo, and challenging authority and generally doing so discreetly and diplomatically.

Where did my fearlessness come, I’ve often wondered? Just listening to my dad, watching the Cowardly Lion on film and taking baby steps to face my fears?

While watching the 2015 political documentary Best of Enemies at home the other evening with my husband, I had a huge eureka moment.

My father, who has a wide range of interests and remains curious and open-minded to this day, frequently talked about his favorite trailblazers. The words, values, and actions of three of them continue to inspire me today.

All three of these larger-than-life figures are known for their courage in speaking up, defending their convictions eloquently through multi-media, and making a huge impact in their professions as well as on society at large. They are:

Our family dinner conversations at our home in Tulsa, Oklahoma included discussions about what Gore Vidal, Shirley Chisholm, and Mohammad Ali were doing, as well as other current events.

This was normal, expected dinner conversation for my parents, my younger sister and brother and me. Even back then, I know we were eccentrics in our community. And I’m proud of it. I have the utmost appreciation and admiration for my parents for the exposure they gave us as well as the tolerance they showed and expected from us.

For example, take Gore Vidal. My parents valued education immensely and both of them had graduated from college, a unique achievement among my classmates’ parents. Gore Vidal was an intellect without a college degree. Also on the tolerant front, same-sex attraction was a theme in several of his books at a time when gay American life was taboo.

Like Vidal, my father is a veteran. My dad served in the Navy during both World War II and the Korean War. During the Vietnam War, my dad vocally defended Mohammad Ali for refusing to serve based on his values, which created tensions between my dad and several of his family members.

As for Shirley Chisholm, she’s the only female professional in the United States who I can easily remember from my childhood. That’s either a sad case for my memory or a sorry state of affairs for powerful women back then, or both.

Now 94 years old, my dad has outlived all three of these amazing individuals as well as many other contemporaries. (My mother died in 2016.)

This Father’s Day I want to wish my dad, Calvin Guthridge, a very special and public “Happy Father’s Day!”

My father has never gotten me to appreciate opera, which is one of his many loves. However I do share his interests in history, politics, and offbeat humor. (The latter also offers a treasure trove of stories…)

Thanks, Daddy, for opening my eyes, mind and heart to a bigger and more diverse world all those years ago!