How to honor your priorities; 3 tips from a working dog 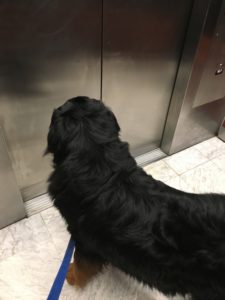 Granted, it’s a helpful – even necessary – work tool, a la the smart phones, watches and other devices we humans rely on.

Yet, like many of us humans, Marcel is prone to give his device top priority, favoring the immediate gratification it provides him.

Why should you care?

This is a cautionary tale for us humans because humans and dog have a very similar reward network in our brain. That’s why neuroeconomists study dogs and their brains.

Plus, the lessons I’ve learned in dealing with Marcel’s “addiction” may benefit you and anyone else you know to exert more control over the use of your devices.

As Marcel’s chaperone and trainer, I have to claim full responsibility for the situation – a therapy dog who now likes riding elevators as much as, or sometimes even more, than his therapy work.

Marcel’s real volunteer work entails being available to meet and greet patients, their family members and hospital staff members to comfort them and be petted.

He gets a lot of attention wherever we are in the hospital or on the grounds. (Of course, it helps that he’s a dog, and a handsome one at that, and a novelty in this environment.)

Marcel still does his job to rave reviews from his many admirers. In the hallways and outside, he good-naturedly stops for people to pet him. And in patients’ rooms he shows an interest in the patients and their family members and guests.

If people don’t look up from their devices when he walks by or enters a room, he just takes the situation in stride. He’ll turn his focus on those who notice him.

But whenever we get anywhere near an elevator bank, Marcel’s calm demeanor transforms. He becomes excited and starts pulling me toward the elevators, generally ignoring all humans except me, his partner.

At the elevator bank, he visibly concentrates on playing the “elevator game.” I designed it back in December 2017 when we started volunteering to get him comfortable riding elevators. (See How to push the right buttons to motivate action that describes the elevator game, which is part of the larger behavior design.)

For the past several months, Marcel and I have now started to practice “elevator etiquette” to get his device addiction in check. His elevator enthusiasm is problematic – to me, not him — on two fronts.

First, when we play the game, some people around us comment that Marcel doesn’t seem interested in them, which could translate into “he’s not doing his job.” I explain what’s going on and they generally laugh since they’ve never met a dog who’s obsessed with elevators. Many stop and watch, rooting for him to win, but they’re not getting the full experience of petting a dog.

Second, when the elevator doors open, Marcel is eager to race inside regardless of whether the elevator is empty or full, or more importantly whether someone wants to get out. Most elevator riders don’t expect a 105-pound furry black dog to be at the open door. And when he’s exuberantly trying to enter they’re even more surprised. Staff members and especially visitors who are already stressed at being at the hospital don’t need this shock.

Marcel is making progress following elevator etiquette, which is based on these three principles. The goal as I designed the principles and lessons was to find a healthy balance between his devotion to his device and his job responsibilities.

As an added benefit, these three principles help me commit to keeping my smartphone in my pocket for the duration of our visit.

Admittedly, as soon as we leave the hospital, I’m looking at my device for recent messages. Luckily, Marcel seems to forget about elevators. Or, if he does crave more rides between trips to the hospital, I’m clueless about how to detect his yearning.

Nonetheless, this experience has further demonstrated the power that devices hold over people and dogs. Do you think you can learn to control your impulses as well as Marcel is starting to do?