How to avoid being viewed as a blank slate or worse, being misunderstood 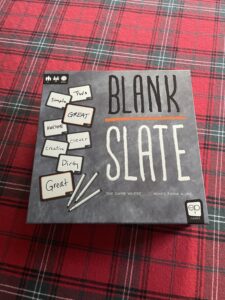 That’s the question different groups of friends and family members asked ourselves throughout the holiday season as we played the board game Blank Slate. The game was fun and instructive on multiple levels, including showing how we assume that others see the world as we do, which leads to misunderstanding.

When our words frequently didn’t match, we had to face reality. No points on the board for us. Plus, the realization that we weren’t in synch with friends and family who know us well. But with a new card/new word, there was hope we could change things in the next round.

With about 250 word cue cards (and a total of 500 options since the cards are double-sided), we had lots of opportunities to choose the same words. Not surprisingly to my family and me, I never won one of the many rounds we played. Yes, I was the contestant who had the hardest time predicting what words others would come up with. And yes, I can be an outlier.

Being a persistent loser at Blank Slate wasn’t a problem for me because I understand the psychology behind the game. Plus, I had just finished reading the 2015 book, No One Understands You and What To Do About It by the social psychologist Dr. Heidi Grant. She explains how to come across to others the way you intend to.

Understanding human beings is a lot harder than understanding the rules of a game, abstract concepts, concrete  physical matter and all other things for a range of reasons. That’s because we humans are complicated, contradictory, and self-centered unique individuals. Our worldview is formed by our genetics, environment, life experiences, assumptions we operate under, and the heuristics we’ve adopted. (Heuristics are the mental shortcuts you develop and then use to solve problems and make judgments. While heuristics help you save time and attention, they also can lead to cognitive biases, which can cause problems.)

Also, we humans tend to make assumptions about others. For example, we often assume that those we’re close with share our opinions and attitudes, which may not be accurate, as we experienced playing Blank Slate. And there are countless of other examples.

And we often assume that others see us the way we see ourselves, which may not be the way we are. For example, my friends, family, and I often see me as an independent outsider, but the ways in which I think and act differently often surprise them and sometimes me too.

As for our actions, we may think we’re clear about what we’re saying and doing. However, others can interpret our words and behavior differently than what we intended.

All of this can lead to misunderstandings from funny to serious, such as misinterpreting a gesture, such as a smile, eye roll or guffaw, as slightly inappropriate to a major insult and more.

Heidi’s book is helpful in explaining why you’re often misunderstood and what you can do about it. Her main point is that you need to clarify the messages you’re sending, which you can do better once you understand the science of perception.

According to Heidi, three main lenses shape the perceptions that people use to look at you:

She provides clear descriptions and useful tips, all research-based, which makes this an especially useful book. For example, she advises leaders who want to be trusted to project with warmth first, then follow up with competence.

The research shows that leaders who showcase their competence over warmth run the risk of appearing cold. This can contribute to a number of problems, such as coming across as uncaring, giving people the impression that you won’t act in their best interest, making them feel fearful, etc.

And as a result, if you downplay your warmth especially initially, you may find that individuals respect you for being knowledgeable but feel anxious around you. And they may not be comfortable, which hinders their ability to do their best work. And depending on what you’re asking people to do, this could hurt them, the work, and you.

Relationships are everything these days. So if you’re not coming across the way you intended, it’s worth taking time to figure out how to be recognized as the person you are. And you can start by realizing this is harder than it looks and then reading this book.

You don’t want to be perceived as a blank slate in which people distort what they see in you to fit their own views; if anything you want to play the game Blank Slate.