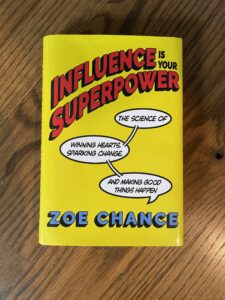 Want to seize people’s attention, capture their hearts and minds, and get them to say “yes” – maybe even before you ask?

Coincidentally, I came across this amazing book by chance on LinkedIn. The author, a behavioral scientist who teaches the most popular course at the Yale School of Management, “Mastering Influence and Persuasion,” had just commented on a LinkedIn posting of one of my former neuroscience professors. I wasn’t familiar with Chance or her new book, although I had heard about her class. So I looked up the book, ordered it, and devoured it. And now I’m recommending it.

Chance takes a fresh approach to influence, looking at it through the lens of neuroscience and behavioral economics. (She describes the latter as the “love child between psychology and economics,” which gives you a sense of her humor and irreverence, which permeates her book.)

Plus, Chance views influence as a positive way to seed and nurture relationships. That’s different from the way best-selling author Robert Cialdini positions influence. He considers it a transactional tool – which some people perceive as manipulation.

By contrast, Chance boldly and wisely states that influence doesn’t work the way most of us assume or were taught. Instead, to be influential, we first need to acknowledge the way the brain operates. This means respecting our two systems (the fast System One, the unconsciousness, and the slow System Two, the executive functioning). (System One and System Two are terms from Daniel Kahneman, author of the best-selling book Thinking, Fast and Slow.)

As background, our unconscious System One guides 95% of everything we think and do, according to the neuroscience research. This system is always on, 24/7, operating automatically in the background, controlling and guiding our behavior. We can’t perceive its control since we’re not aware of how it works; instead, we just benefit from it. This fast system is emotional, habitual, and intuitive.

As for the other 5%, that’s System Two at work. This slow conscious system does one thing at a time, tires easily, and has space limitations. On the plus side, it guides our abstract thinking, including planning and goal setting, reasons, makes decisions, and amplifies our creativity. This deliberate system analyzes facts, figures, and other data. Because we’re able to perceive when we’re consciously thinking, we think we’re in control most of the time, but it’s really System One that’s directing us.

When it comes to influence, Chance says we like to think that we can influence others with data, but facts and figures just aren’t as persuasive as we think they are. That’s because so much of what we do, our decisions and our behavior, are guided unconsciously by System One. By the way, in her book, Chance uses different and more descriptive terms, calling System One “the gator” and System Two “the judge” to make them easier to remember and distinguish.

According to Chance, you’ve got to focus on the unconscious, emotional, habitual gator, System One, whenever you want to influence someone. That means grabbing their attention and getting them interested and curious about what you’re saying before you give them any details that will appeal to their judge, System Two.

Understanding and working with this brain asymmetry is one of the keys to being a better influencer. System Two, the judge, needs to get involved to make decisions. However, to get to System Two, you need to get through to the gator, System One, by grabbing its attention and motivating it.

Once she explains the neuroscience, Chance then draws on on her extensive classroom and business experiences throughout the rest of the book. Personally, I was convinced of her expertise when I learned she ran a $200 million dollar segment of Mattel’s Barbie brand. (I loved Barbie dolls when I was a kid.) She’s also advised Google and a number of other companies. And being a professional, she grounds the book in scientific research. All this makes the book readable, practical, and powerful. And yes, influential!

By the way, if you feel uneasy about negotiating, Chance’s approach to this topic may resonate well with you too. For example, because Chance focuses more on building relationships rather than purely winning people over to your point of view, she shows you how to reframe many of your interactions.

One of my favorite ideas is to position negotiations as conversations in which you collaborate with others, not confront them. I especially appreciate her magic question, “What would it take?” Adapted from Gloria Steinem, this question not only conveys respect, but it also can help you discover important information. And that information can lead to more creative and better solutions.

Of all the books I’ve read on influence, this is my favorite! Are you convinced to rethink your approach to influence?