How analytics can help you be a more equitable leader 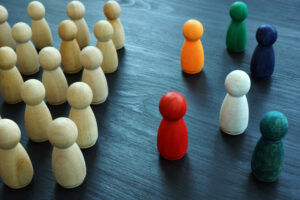 Appreciate, or even, expect equal pay for equal work, and other fair treatment too? You’re not alone.

Fairness—or equity—is not just something we desire; it’s an evolved behavior. That’s a key learning from my online class on the neuroeconomics of decision-making from several years ago.

Back then researchers weren’t sure how the sense of fairness developed. They believed it was related to social learning around cooperation. But they didn’t know which came first: learning to cooperate with others or wanting fair treatment.

To try to find the answer, researchers studied primates. In my neuroeconomics class, we reviewed the experiments conducted with female brown capuchin monkeys. The female monkeys especially are known to make strong social bonds, cooperate with their peers, and value fair treatment. Their behavior demonstrated the value of equity. As you can see in this video clip, the capuchin who received an unfair “payment” for her work lashed out at her human “boss.”

Since then, researchers from Georgia State University and Emory University have delved further into studying how cooperation combines with fairness. They now theorize that humans’ reaction to fair and unfair treatment has evolved as a way to support our long-term need for cooperation. In other words, humans want fairness not just for the sake of fairness in individual transactions, but also for the sake of long-term, continued cooperation with others.

Our actions can show that sometimes we do things that run counter to our short-term interests. For example we can react negatively to getting a lesser reward, as the monkeys do. And in other situations, we can get upset if we get more than somebody else, such as special recognition, which doesn’t seem logical.

According to the researchers, we humans seek outcomes that seem fair over time. For example, individuals can be willing to give up an immediate benefit today to ensure relatively equal outcomes over time, assuming this behavior will result in stabilizing valuable long-term cooperative relationships.

So far, this way of thinking and acting only applies to humans and our closest relatives, the apes, due to our advanced cognitive ability. You’ve got to have a significant amount of brain power and control to be willing to give up immediate tangible benefits in exchange for long-term advantages you can gain from a relationship. Also, you need to have the ability to think ahead for the future plus the self-control to delay the gratification of receiving an immediate reward.

But wait a minute. What about all the humans who are currently receiving inequitable rewards or distributions because of their gender, race, or some other factor because they’ve historically been considered members of outgroups? Do they expect over time that they’ll start to earn their fair share, especially from ingroup members who divvy up the rewards? And what about ongoing inequity regarding health, education, housing, and everything else that contributes to their quality of life?

On an individual level, people may be hopeful that they can start earning their fair share, especially if they do good work, look for ways to excel and be promoted, and cooperate well with others. Yet, statistics show that these inequities are so embedded in structural systems that it will take multiple decades for the playing field to level out so that all outgroup members, like people of color and women, can reach parity in the workforce with the ingroup members, white men. (For example, check out Women of Color and the Wage Gap.)

In recent years, especially after George Floyd’s murder and the pandemic, employers and others have begun to recognize all the problems contributing to inequity and started to explore ways to make structures and systems more equitable.

But even measuring the extent of the inequity is a challenge, which led me to ScholarSite’s Analytics for Equitable Leadership, a five-session online course taught by Professors Chris Rider, University of Michigan, and Ray Reagans, MIT. The two professors have developed a valuable framework for understanding, analyzing, and addressing disparities in the workforce, classroom, supply chains, investments, and other situations.

The professors showed the class how to identify problems as well as the causes of the disparities. We looked at the gaps through an equity lens and then discussed how to design interventions to reduce the disparities. Before the design phrase though, you’ve got to analyze two mechanisms of inequity, which may work on their own or in combination, adding to the complexity, as the professors explained.

On the one hand, there could be differential treatment among groups. For example, companies that hire people of color and women primarily for staff positions often promote white men who’ve been in operations to leadership roles. When operations is the traditional and favored path to leadership, different groups of employees can experience different behaviors and different outcomes.

On the other hand, equivalent treatment can sometimes generate different outcomes by group. This can happen when organizations use algorithms to try to treat everyone fairly yet the algorithm itself doesn’t acknowledge the unequal circumstances that exist within the population. For example, consider job applicants submitting resumes. One of the studies we looked at showed that Black job candidates with high quality resumes needed to submit more than twice as many applications as white candidates to receive the same number of interviews. To be equitable, the algorithm needs to be used in a different manner or changed.

My top three learnings were: 1) collect data; 2) analyze the data carefully to ensure understanding of the root causes; and 3) be willing to experiment with customized interventions on a local level. Furthermore, some action is better than none.

The two professors are planning to teach a new cohort in the coming months, and I highly recommend their class. The professors and the guest speakers they featured are terrific and the content is engaging. It was the best $600 I’ve spent in a long time. You can sign up here. Once you pay, you’ll be eligible for a $50 Amazon gift certificate and I will too.

Liz quickly 'gets' the broader picture of the project. She goes beyond doing simply what she was hired for and gets immersed in the culture and politics of the company. She is exquisitely fine-tuned to the needs of her clients."