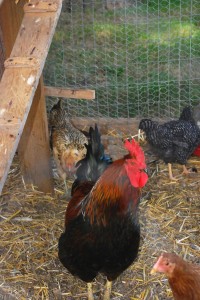 Long before the Harvard professor emeritus wrote A Sense of Urgency, I heard the chicken merchant squawk to his staff about the need for speed.

Early on in my career before cell phones were common, I was checking voice mail at a phone bank at the Atlanta airport. I first heard the high-pitched, folksy voice. Then I noticed the well-dressed man whose head looked a bit like a chicken’s standing next to me. He started yelling into the phone something like, “You better act faster! At the speed you’re going, I’ll be dead by the time you finish!”

Frank Purdue looked perfectly healthy, just like he appeared on his TV commercials, so I figured he was practicing hyperbole. He was supposed to be a bit of a bully. The closing line of the commercials was always, “It takes a tough man to raise a tender chicken.”

That encounter made an impression on me. An upset CEO who looked like his merchandise was imposing. (I knew he probably wouldn’t bite me, but….) And, urgency was vital.

This memory came rushing back recently when one of my clients decided to send the top 85 leaders of the organization their own copy of Kotter’s A Sense of Urgency book, which is all about the first step in his eight-step change model.

To make the messages about urgency stick for this large-scale, transformative change initiative, we’re taking these three actions:

1. Modeling urgency. The very top executives must act in an urgent matter; they can’t just talk about it or worse yet, be complacent.

2. Measuring whether leaders feel a sense of urgency. Leaders self-report regularly through surveys. To date, the scores increase after they’ve met and talked with others about the need to change and the actions we’re taking.

3. Providing support, such as the book and the accompanying change tips I’ve prepared. We’ll also look for opportunities to help leaders and their employees listen more to customers, as well take actions inside the walls of the organization. For example, it will be critical to find and eliminate non-value add work, as well as remove other bureaucratic barriers. We also may need to help leaders deal with the NoNos, as Kotter calls them, the individuals who naysay and resist change.

These days, so many of us run around like chickens with our heads cut off. (Sorry, I couldn’t resist!). However, it’s often manic activity—or what Kotter refers to as “false urgency.” Instead, we need to work smarter as we move quickly.

Are you moving in the right direction? Not just crossing the road to get to the other side as in the old fowl chicken joke?  And do you feel and practice a sense of urgency?