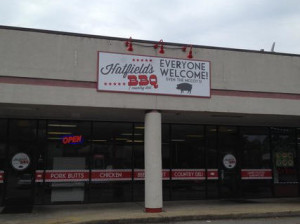 “Everyone Welcome! Even the McCoy’s”

On the surface, this sign at Hatfield’s BBQ in Nashville alludes to the long-running, post-Civil War Hatfield — McCoy feud from neighboring Kentucky and West Virginia.

For me, studying applied neuroscience through the NeuroLeadership Institute, the sign prompted me to think of a modern-day feud that exists in many organizations, sometimes out in the open but often bubbling under the surface.

It’s the clash between the “why” and the “how”—usually represented by different factions.

The “why’s”—often the leaders—are flying at 50,000 feet or even higher. Individuals interested in the “why” are focused on the vision, the mission, the strategy, the context, the competition, the industry, the future and other big picture items.

The “how’s”—often the engineers—are on the ground and in the trenches. Individuals who gravitate toward the “how” are consumed with the details, the specifics, the particulars and everything else they think they need immediately in order to start executing.

This is a natural divide as I’ve learned in my coursework. Our brain has two different systems for processing the “why”—the motivational—and the “how”—the executional—which work at different times.

Each of us shows a preference for using one system over the other, although we can strengthen the one we’re weaker in.

(If you’re interested in the science, check out this research report, Dissociable Neural Systems Support Retrieval of How and Why Action Knowledge, by Robert P. Sprunt, Emily B. Falk, and Matthew D. Lieberman, from Psychological Science, 21(11) 1593–1598, 2010. )

The divide between the “why” and the “how” came through loud and clear during a conference call that one of my client’s Executive Team recently hosted for its top 140 extended leadership team.

The executives wanted to explain the new business model that they’re planning to roll out in several weeks. They intentionally had designed about 80% of it, recognizing that the next level of leaders should complete it.

Based on their positions in the organization, these other leaders are better positioned to add the details. Plus, by taking ownership, they should become more committed to the new model.

When we opened up the phone line for Q&A, the questions immediately jumped us from the “why” to the “how.” The next level of leaders didn’t want to focus on the business model design, especially the part they needed to work on.

The two camps—the “why” and the “how”—were lining up across from one another.

So how do we bridge the “why” and the “how” divide rather than accept the conflict or contribute to a feud?

1.  Make people aware of the two different ways of thinking. In other words, be explicit about our brain differences as well as the need for both modes. One is not better than the other. By getting the “why” and “how” to work together, we get more comprehensive, logical and higher-quality plans, decisions and actions.

2. Encourage people—including yourself—to befriend someone whose brain is inclined toward the other mode. The other person can help you get unstuck in “your” way as well as help you bring harmony to your thinking so you’ve considered the full spectrum. (According to the neuroscientists, it’s easy to get stuck in the “why”—if that’s your preferred mode. Conversely, if you primarily focus on “how,” you can lose sight of the “why.”)

3. Intentionally assign “why” thinkers on “how” teams and vice versa. The diversity in approach will help improve the team’s plans, decisions and actions. And if people know the value they bring with their thinking, they should be able to co-create rather than clash.

How can you be like the BBQ joint and welcome the opposition–in this situation, the other way of thinking?