How to enjoy playing an infinite game 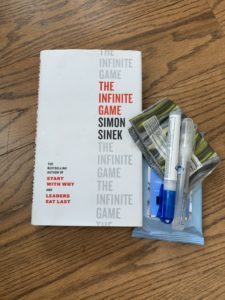 Did best-selling author Simon Sinek have any idea how prophetic his new book The Infinite Game would be?

At the April 2018 WorkHuman conference, Sinek gave us participants a preview of his latest thinking.

Sinek explained that after reading James Carse’s 1986 book, Finite and Infinite Games: A Vision of Life as Play and Possibility, a few years earlier, he had become enamored with the book’s ideas. Sinek was especially intrigued as to how an infinite mindset might work in business. He started testing his permutation of the concept with other groups and individuals.

In infinite games, such as business, politics, or life, the games’ players come and go. They also can change the rules. These infinite games have no winners and losers. That’s because there’s no defined end point – just what happened before and what lies ahead.

Business leaders who embrace an infinite mindset have a readily identifiable “just cause” (Sinek’s preferred term for “purpose”) for why they’re in business. With a north star to guide them, these leaders build resilient, innovative and trustworthy organizations.

Yet, many business leaders and their followers tend to use a finite mindset to play this infinite game. They see business more like a sports game or a game of chess. There are fixed rules, designated players, and an endgame with distinct winners and losers.

The combination of a finite mindset with an infinite business game creates discord. Individuals are focused on making their numbers for the quarter, as well as taking other shortcuts to beat the competition. Their organizations make money but aren’t known for their innovation, deep talent or long-term performance.

Sinek’s ideas were thought-provoking. (For more, check out my blog How to share in my memorable WorkHuman moments.)

At the same time, his WorkHuman presentation met my Goldilocks principle – just the right amount of information. So, there was no need to buy and read his forthcoming book to benefit from the book’s concepts.

But once the book came out this fall, I had second thoughts. And I’m glad I did, especially considering two recent external events that make the book especially relevant, the Business Roundtable’s announcement and the COVID-19 pandemic.

When the Business Roundtable announced last August it was redefining the purpose of a corporation, Sinek’s book was at the publisher but not yet released.

The Business Roundtable, which represents 181 CEOs of big corporations, decided that companies could no longer just maximize profits for shareholders. Instead, CEOs need to lead their companies for the benefit of all stakeholders – customers, employees, suppliers, communities and shareholders.

The extent to which other companies will join in to promote this “economy that serves all Americans” is yet to be seen. However, the decision represents a seismic shift since the Business Roundtable started issuing principles of corporate governance back in 1978.

Interestingly, the philosophy that stakeholders rule, which dominates finite businesses, took root just a few years before in the early 1970s, which I either never learned or don’t remember from all my economics classes.

As Sinek explains in his book, which The Atlantic also addressed back in August, the University of Chicago economist and Nobel laureate Milton Friedman single handedly led the charge for stakeholder dominance.

In an influential 1970 New York Times article, Friedman argued that a CEO is “an employee of the owners of the business.” Therefore, the CEO needs to conduct the business according to the owners’ interests, which generally is to give them the highest return possible. In other words, Friedman insisted that the sole purpose of business is to make money for the shareholders.

About half a century later, the tide is turning back, which better supports infinite games. Unrelated in this VUCA (volatile, uncertain, complex and ambiguous) world, the 2020 COVID-19 pandemic is now subsuming us. In just a few days, the pandemic has upended life as we know it in North America, Europe, the United Kingdom and other areas.

Yet when we embrace an infinite mindset, we’re better equipped to handle the pandemic’s many challenges. To try to contain the highly contagious, fast-spreading coronavirus, governments are encouraging and, in some cases, requiring individuals to change their behavior.

We’re now practicing social distancing in physical space and numbers. Employees who can are now working from home. Schools and businesses have temporarily shut. We’re dealing with the social and economic fallout that China and other countries in Asia experienced earlier this year.

With these actions, we’re playing the long game, the infinite game. We’re working to mitigate overloading health care providers, hospitals and other aspects of the health care system, as well as trying to minimize the number of deaths.

Who knows how we’ll manage? However, it’s heartening to see individuals and businesses joining forces to put public safety and well-being ahead of personal and business interests and profits.

For example, consider LVMH, the parent company of the luxury brands Dior, Givenchy, and Louis Vuitton. It’s converting its perfume facilities to manufacture hand sanitizer that it will donate free of charge to the French health authorities.

A much smaller and younger company, Zoom, is making its popular webinar platform available free of charge to K-12 classes around the globe for online learning.

And several regional utilities, such as Dominion Energy, are committing to customers that they are suspending shutoffs and late fees during the pandemic.

Other good Samaritans and role models are emerging to help us navigate our infinite game.They include businesses donating food and flowers they can’t sell and individuals sewing cloth masks for health care workers. Here’s hoping we all can nurture an infinite mindset as well.

What does the infinite game and mindset mean for you?