How can you be trustworthy — both ethical and competent? 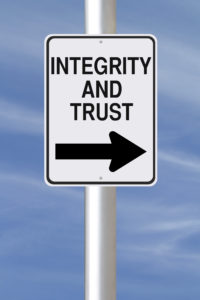 Do you consider yourself competent and ethical? In other words, you’re competent if you’re good at what you do, and you do what is right.

If you’re like most of us who work for a living and are reading this, you probably answer “yes” to my question. And when you’re both competent and ethical, you’re considered trustworthy.

But individuals are different from institutions.

This past fall, more than 34,000 individuals around the world in 28 markets rated the trustworthiness of four groups of institutions on the two dimensions that form trust: competence and ethical behavior.

The results from this 20th anniversary annual Edelman Trust Barometer are sobering. None of the four types of institutions are considered both competent and ethical. And yet these institutions form the bedrock of our global societies: business, government, non-government organizations (NGOs) and media.

Even worse, from the perspective of being trustworthy, this year’s Trust Barometer shows extreme imbalances among the institutions. For example:

What’s striking about these results is that these institutions are us. Individuals come together to form all  institutions. And many of us are active participants in at least two, maybe three of the organizations, and possibly all four.

For example, we may not be government employees, but we are taxpayers wanting to hold the government accountable. Or we may be a member of a joint commission between government and a non-profit organization.

To say it another way, we are the problem, not as individuals, but collectively when we come together in a larger group or groups that make up these institutions and cede control and power to those at the top.

Furthermore, the distrust of these big four institutions becomes even more prominent when looking at the “mass-class” trust divide among the survey participants.

The informed public are made up of respondents who met these four criteria. They are: 1) between the ages of 25 and 64; 2) college educated; 3) in the top 25% of household income per age group in each market; and 4) self-report significant media consumption and engagement in public policy and business news. The informed pubic is about 17% of the total global population, according to Edelman.

Between the informed public and everyone else, there’s a global 14-point gap in institutional trust. In developed markets, including the US, less than one in three people in the general population believe they will be better off in five years. Less than 20 percent express confidence in the system, and 73 percent are looking for change. The Edelman report also states that more than half believe that capitalism causes more harm than good, and that democracy is losing its effectiveness.

The US results are especially troubling. In just one year, Edelman noted a seven-point drop in optimism.

It’s not just that hope and optimism are dwindling. Multiple fears are growing. For example, Edelman found that 83% of employees around the world are worried about job loss due to “the lack of training, cheaper foreign competition, immigration, automation and the gig economy.” Furthermore, “over half of our respondents said they are losing the respect and dignity they once enjoyed in their country…Six in 10 fear the pace of technological change; they are no longer in control of their destiny.”

Along with these rising fears is a shift in the balance of power within business. For instance, survey respondents said that “customers and employees are over five times more important to a company’s long-term success than shareholders.”

With this power shift is the respondents’ desire for businesses to take action to support customers and employees, even though two-thirds of the respondents don’t trust that business will follow through on paying a living wage and retraining workers.

Respondents are more trusting that their employer will speak if not act. According to Edelman, “a “stunning 92 percent of employees who were surveyed” say they “expect their employer’s CEO to speak up on one or more issues ranging from income inequality to diversity and training for jobs in the future.” And “73 percent of employees expect a prospective employer to offer the opportunity to shape the future of society in a positive way.”

Edelman’s leaders agree that business must take the lead to deal with this “trust paradox” because business has the greatest freedom to act, including the speed to do so.

As for trust-building actions for businesses to take, Edelman suggests these three priorities: 1) pay fair wages; 2) focus on retraining, and 3) partner with government.

Yet, are business leaders up for the challenge to take bold actions that will enable and empower individuals — especially those who aren’t part of the informed public — to regain hope and improve their lives?

To be trustworthy, business leaders need to act ethically as well as competently. As Edelman and others of us assert, the components of ethical behavior are being honest, having and articulating a vision, being purpose-driven, and demonstrating fairness.

And just because you believe you’re acting ethically doesn’t mean that others will perceive you to be an ethical player, especially on their behalf.

What’s the implication for all of us who are members of the informed public?

We have a lot of explaining to do, especially around the huge issues of our times, namely income equality, sustainability, information quality and privacy, and artificial intelligence.

And we need to lead by example to start closing these gaps that to many feels less like a crack in the pavement and more like the Grand Canyon.

What’s your reaction and response?